What a great show day! Satin Angoras were well represented in Springfield Show A. 5 white with 3 exhibitors. 13 colored with 6 exhibitors. Both SR classes in colored have enough for legs! Plus, we were first on the table in both Show A & B, so were finished up by 2:30. In Show A, Silverheels was BOSV and Santee was BOV in her first showing. In Show B, Silverheels was again BOSV and BOS. Add to that I was able to get all my young seniors registered, and it was a very satisfying day. Congrats to Ann Mary for BOB in Show A and to Will for BOB in Show B!
- March 26, 2017 No comments:

This is the ram that my flock was based on before it was sold.  He is a Welsh ram, and at the time of his collection, was the top indexing ram in the UK sire reference scheme.

After weeks of above normal temps, on Thursday night, the temperatures plummeted and we had snow in the morning.  Of course, right before 3 of my Satin Angora does were to kindle.   California had a single black kit Friday evening, so I brought it in the house for the night.
Checked everyone at midnight, and all was quiet.  The sky was clear and the stars were very bright in the COLD air.  Temps went down into the 'teens.
This morning, I found both Silver City and Oakland had kindled.  Both had pulled lots of wool, and their babes were warm, dry and fed.  Silver City has four - 3 chinchillas and a chocolate chinchilla.
Oakland has seven - some chinchillas, self chins, and 2 pearls/ermines.   The 2 light colored ones went into California's nestbox to help keep her singleton warm.
Its to be colder than normal for the next 10 days. (average highs s/b near 50)  Another night in the 'teens tonight, and clear skies.  Today it will not get over the freezing mark, but the sun is out and the sky is bright blue.
- March 11, 2017 No comments: 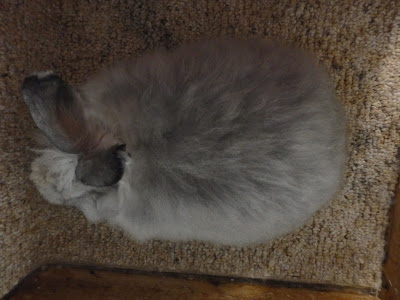 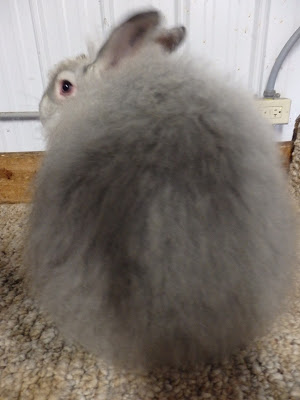 2 bucks, chocolate and black, ready for their new fiber home near the end of the month. 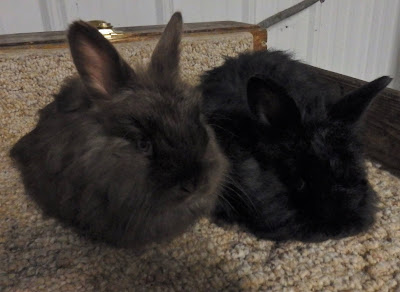 The ram that started it all